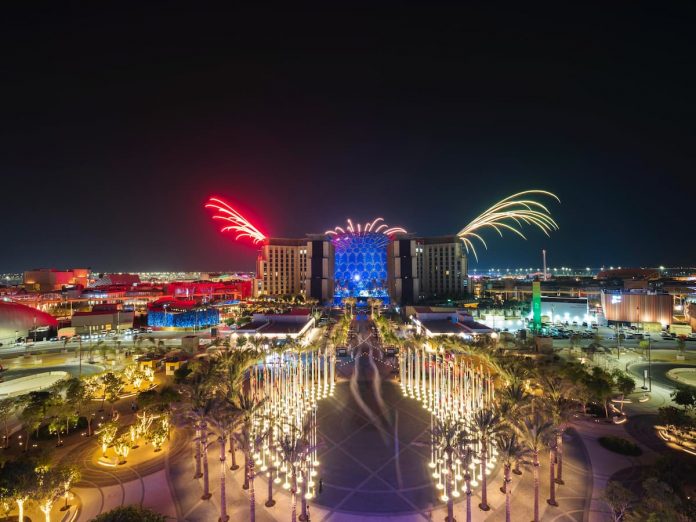 Expo 2020 Dubai officially opens its doors to the world from today Friday October 1st until March 30th 2022. Over 20 million visitors are expected for the entire semester of the exhibition.

During the day, the inaugurations of the national pavilions took place, including that of Italy.

With the claim "Beauty unites people", the themes of the Italian Pavilion mainly concern climate, space, urban development, the promotion of intercultural dialogue,artificial intelligence, innovation in health, in agriculture and the objectives of the UN 2030 Agenda. The Italy Pavilion, designed by Carlo Ratti, Italo Rota, Matteo Gatto and F & MIngegneria, is one of the most evocative attractions of Expo 2020 Dubai. During the prestigious Construction Innovation Awards in the United Arab Emirates, the Italian Pavilion was awarded the prize for the best entrepreneurial project of the year.

Creativity is the absolute protagonist. It promised to be one opening ceremony surprising and did not disappoint. A breathtaking 90-minute show was aired from the United Arab Emirates inside the dome of Al Wasl Plaza, packed with ultra-high-resolution cinematic content.

With the theme "Connecting Minds, Creating the Future" (“Connecting Minds, Creating the Future”), Expo 2020 Dubai will be a “connection” between peoples, countries, cultures and ideas and “creating the future” for a new world renaissance. Representing the claim of Expo 2020 Dubai in the opening ceremony, it was a little girl who, between choreography and great special effects, acted as a link between the first and second part.

Among the most exciting moments of the show, in addition to the intervention of Sheikh Nahyan bin Mubarak Al Nahyan, Commissioner General of Expo, as well as Minister of Tolerance and Coexistence of the Arab Emirates, who retraced the history of the United Arab Emirates also the parade of flags of all 192 countries participating in the universal exhibition.

Many international artists participated in the grand opening event of Expo 2020 Dubai, the world-famous Italian tenor Andrea Bocelli performed The Prayer as the grand finale of the ceremony.

“I am very happy and honored to be in one of the most important world events, especially after a difficult year like the one we have been through. For me it is a way to share great optimism with everyone, to look to the future with confidence. The opening ceremony only kicked off an unprecedented world event, the first in Arab territory ”.

The show goes on. In the evening today fireworks are scheduled in some symbolic places of Dubai: Dubai Festival City, The Frame and The Pointe, Palm Jumeirah. Both The Pointe and Dubai Festival City will incorporate their fountains into an Expo 2020-themed light and sound show, while The Frame's façade will be illuminated in the colors of the Expo. The flags of the participating countries will also be displayed and with stands also for the purchase of Expo 2020 tickets.

Expo City Dubai: the new city of the future