That honey is a panacea for all seasonal illness was something our grandmothers knew well. From a cough to a stomach ache, from burns to stubborn wounds, a spoonful of honey to swallow or to apply locally was the solution to every problem.

These popular beliefs do have a solid scientific basis. As illustrated in The Nature and Composition of Honey and in countless other articles and studies published by Peter Molan, professor of biochemistry and founder and director of the Honey Research Unit of the University of Waikato in New Zealand, there are several factors that determine the antibacterial capacity of honey:

One variety of honey stands out as being more powerful than all others: Manuka honey, derived from the Leptospermum scoparium plant, which grows spontaneously in New Zealand: Manuka is the Maori word for the tree with its characteristic white flowers.

Manuka honey is characterized by its non-peroxide activity, ie the unique ability to maintain its antibacterial power even by adding the catalasein other words the unique ability to preserve its antibacterial properties even in the presence of catalase, the enzyme that breaks down hydrogen peroxide. The non-peroxidic activity is due to the presence of so-called essential markers: the combined action of these substances, found only in Manuka honey, is such that, depending on their amounts and proportions, it may be possible to label the honey as therapeutic. Several studies have been performed over the years in addition to Professor Molan’s, for the most part these are collected in Honey Therapeutic Manuka: No Longer So Alternative (Frontiers of Microbiology).

The paper highlights well the many fields of application and efficacy of Manuka honey:

Studies are also being run, which will require additional work, on the possibility of controlling the growth of cancerous cells and metastases, and to alleviate the collateral effects cause by chemo- and radio-therapy.

Following the publication and release of this research, as well as others, Manuka honey as expected is now booming all over the world, with Leptospermum scoparium being exported in areas unsuitable for production. In an attempt to control the situation and avoid abuse and false promises to the public, over the years different classification criteria have been proposed, to be either discarded or approved officially by governments, starting with New Zealand. Setting aside specific products for clinical or hospital use, which follow dedicated distribution channels, it is now possible to buy jars of Manuka honey in many pharmacies and para-pharmacies. To understand one’s way around the shelves, it is essential to distinguish the accepted standards for the definition of purity, quality, and therapeutic level:

The numbers quantifying UMF and Molan Gold Standard are comparable. The classification of Manuka honey according to the three standards is the following: 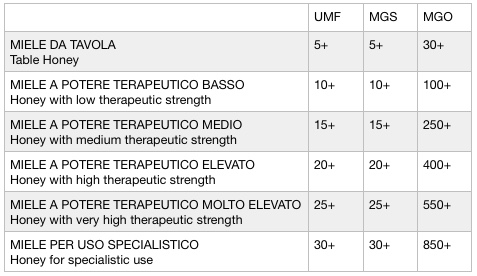 In practical terms, therefore, what is the way to use Manuka honey to reap the maximum benefits? As recommended on the web page www.myersdetox.com by diagnostic-functional nutritionist Wendy Myers of the USA, author of a very popular YouTube channel, it is possible to consume Manuka honey orally or to apply it locally according to the following dosages.

It is therefore safe to conclude that, expect for the specific conditions such as allergies or diabetes, Manuka honey is a true broad-spectrum remedy. It is quite strong (not to mention expensive), so there is no need to overdo the therapeutic grade to reap the desired results. One word of warning: do not add it to hot beverages such as tea, chamomile, or milk, as one might be tempted to do with common honey, especially for coughs and colds: the heat damages or nullifies the non-peroxidic activity of its components. Better to consume it directly from a tablespoon or, as an alternative, after spreading it on a slice of bread: it has a very characteristic taste, sweet and tangy, typical of dark honey.

Load More Segui su Instagram
© Copyright 2017-2022 | © Italian Healthcare World Journal
We use cookies on our website to give you the most relevant experience by remembering your preferences and repeat visits. By clicking “Accept”, you consent to the use of ALL the cookies.
Cookie settingsACCEPT
Manage consent